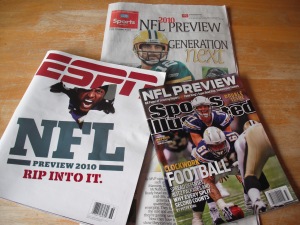 USA Today, Sports Illustrated and ESPN the magazine have all put out great NFL 2010 previews. In checking out all of these previews I have come up with the 6 stories I am going to follow through the regular season.

Will they repeat? Very hard thing to do. However if anyone can do it, they can. They have the coaching and leadership needed for that kind of journey. At minimum, they should win the NFC South.  Should be a fun ride. I picked them Thursday (9/9) to beat the Vikings, which they did. As they say in the Big Easy – Who dat? Saints are the champions until someone else wins the Lombardi.

To get a perspective on the Saints mindset for the 2010 Season, check out this story by Jim Corbett from the  September 9th edition of USA Today.  www.usatoday.com/sports/football/nfl/2010-saints

Are the Jets going to live up to the hype of Hard Knocks? Will their QB Mark Sanchez improve over last year or implode? Will the Jets have enough success to allow Gary Vaynerchuk (http://garyvaynerchuk.com) to stay focused on the Thank You Economy? What about the Patriots? Will they battle back to the days of recent glory? Will Randy Moss sulk or battle? I predict that one of these two teams is going to win the AFC East…Let’s see who.

Lots of drama in this division. Will this be “THE” year for the Cowboys? McNabb in a Redskins helmet? Mike Shanahan prowling the Redskins sidelines? Will the Giants win enough to be the THE team in NY, or will the Jets overshadows them? Who will win this division?

At this point in my life I am surrounded by a number of Cowboy fans. Dan from church, Jason- my son’s baseball coach, the Sean Moore (check out @iamseanmoore on twitter to check out this young man’s journey), they all love the Boys, as they say.

I have never liked the Cowboys. Reluctantly, I picked them to make the playoffs this year. However, they will not make it to the Super Bowl. They do not have the leadership or the coaching to make it that far. Sorry – Dan, Jason, and Sean.

Who will win the NFC North? The Vikings? The Packers? I believe that this will be the year for the Packers. I am also guessing that Brett Farve will have a tough year and that is likely to lead to drama of Shakespearean proportions. I cannot wait to see how this unfolds!

I think the Ravens have a legitimate shot at the Super Bowl. The Steelers are not going to make the playoffs. If they do, it will as a wild card team. Bengals – so much promise, so little real hope. I love Carson Palmer (USC), however both Ocho Cinco and Terrell Owens…the circus has come to the Queen City. Lucky for them – they have Skyline Chili (www.skylinechili.com) so they can have something delicious to Eat For Comfort (www.eatforcomfort.com).

On Facebook and on Twitter (@stevenshomler), I picked the Texans to beat the Colts in their Week 1 match up.  One of these two teams is going to win the division and the other is going to win the wild card….Maybe…It will great to see this play out over the next 16 weeks of football.

Patriots, Ravens, Colts, Chargers (only because they play in a very sad division), Texans and the Jets.

That’s it for now!