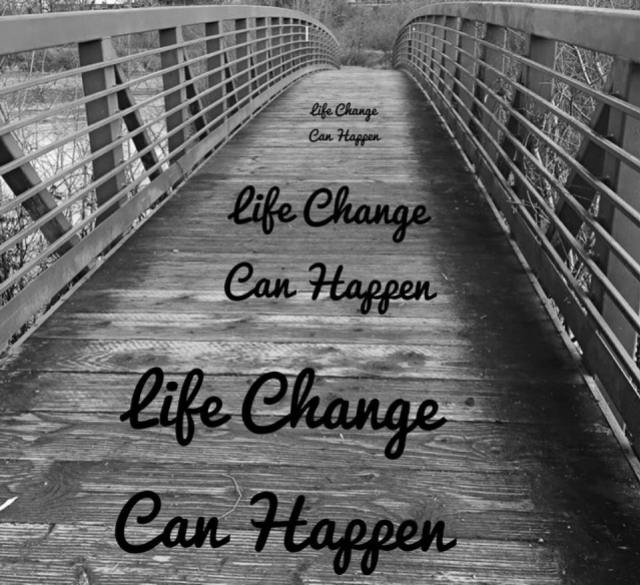 On September 4th 2011, I was talking with someone and they told me emphatically that that “Life Change Can’t Happen”.

I vehemently disagreed. I was so mad, that right then I went onto my iPhone and I bought LifeChangeCanHappen.com

In September of 2011 I was on the very front end of my journey to become a Speaker and an Author.

Just two months earlier, in July of 2011, I had stood in a dirt driveway in Southeast Portland and declared that I was going to take my writing seriously  and become a Speaker and an Author.

When I made that declaration, I was in in the process of moving out of a 5 bedroom house to an unheated, unfinished, one car garage.

At that point — my choices were: #1 live in that garage, #2 move to Colville, WA. or #3 live on the streets. Why I choose the garage is another story for another time.

In September 2011, that garage held my bed, a clothes rack, and the desk that my computer sat on. At night I would sit in the garage and type and tell myself that I would be going to become a Speaker and and Author.

In October of 2011, I also decided that in addition to becoming a Speaker and an Author, that I would become a Food Writer as well.

#1 Having a book signing at Powell’s (I had never ever been to Powell’s in my life),

#2 Speaking at the Bite of Oregon on their Chef’s stage (I had no culinary background and I had not ever been to the Bite Of Oregon),

Those four items became goals that I thought about it a lot. Those goals inspired me and kept me typing on my keyboard.

In October of 2011 when I began excitedly telling friends about my newest dream — that I was going to become a “Food Writer” and sharing with them the 4 goals listed above, some of them mocked me. Some of them flat out told me that I could not do that. The responses I got along the way were often very discouraging. One friend emailed me and told me that I was “doing it all wrong” and that I would never become an Author if I keep on doing what I was doing.

All along, the domain I purchased on September 4th, 2011 – LifeChangeCanHappen.com was a battle cry I would use.

I had (and have) a number of battle winning battle cries that I yell out in order to stoke my own fire.

Life Change Can Happen has been a favorite battle cry of mine because someone had the gall to look me in my face and tell me that life change can’t happen.

Life Change Can Happen. Don’t ever let anyone tell you otherwise.

Trust me – You Can Change Your Life.

I am Steven Shomler and I am pulling for you!

If you would like to easily share this article with someone it can be found at www.LifeChangeCanHappen.com and at  www.stevenshomler.com

This entry was posted in Battle For Your Dream, My Journey and tagged Achievement, Battle for your Dream, Battle Winning Battle Cry, Bite Of Oregon, Dreams Do Come True, Food Writer, Goal Setting, Homelessness, Iron Chef, Life Change, Life Change Can Happen, Powell's, Steven Shomler, Steven Shomler Author, Stoke Your Own Fire, Tell People Who Will Cheer You On, Writer, Writing, Writing To Make It Happen, You Can Change Your Life. Bookmark the permalink.